Weighted, Blended is an approximate order-independent transparency technique which was published in the journal of computer graphics techniques in 2013 by Morgan McGuire and Louis Bavoil at NVIDIA to address the transparency problem on a broad class of then gaming platforms.

Their approach to avoid the cost of storing and sorting primitives or fragments is to alter the compositing operator so that it is order independent, thus allowing a pure streaming approach.

Most games have ad-hoc and scene-dependent ways of working around transparent surface rendering limitations. These include limited sorting, additive-only blending, and hard-coded render and composite ordering. Most of these methods also break at some point during gameplay and create visual artifacts. One not-viable alternative is depth peeling, which produces good images, but is too slow for scenes with many layers both in theory and practice.

There are many asymptotically fast solutions for transparency rendering, such as bounded A-buffer approximations using programmable blending (e.g., Marco Salvi's work), stochastic transparency (as explained by Eric Enderton and others), and ray tracing. One or more of these will probably dominate at some point, but all were impractical on the game platforms of five or six years ago, including PC DX11/GL4 GPUs, mobile devices with OpenGL ES 3.0 GPUs, and last-generation consoles like PlayStation 4.

The below image is a transparent CAD view of a car engine rendered by this technique. 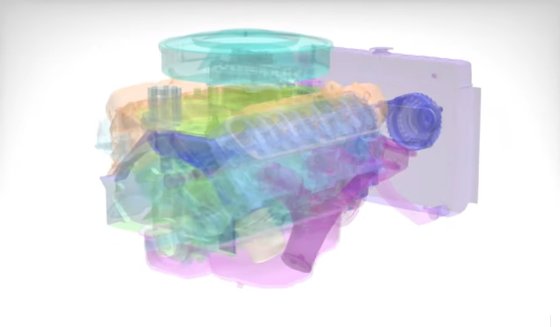 This technique renders non-refractive, monochrome transmission through surfaces that themselves have color, without requiring sorting or new hardware features. In fact, it can be implemented with a simple shader for any GPU that supports blending to render targets with more than 8 bits per channel.

It works best on GPUs with multiple render targets and floating-point texture, where it is faster than sorted transparency and avoids sorting artifacts and popping for particle systems. It also consumes less bandwidth than even a 4-deep RGBA8 K-buffer and allows mixing low-resolution particles with full-resolution surfaces such as glass.

For the mixed resolution case, the peak memory cost remains that of the higher resolution render target but bandwidth cost falls based on the proportional of low-resolution surfaces.

After all transparent surfaces have been rendered, it then performs a full-screen normalization and compositing pass to reduce errors where the heuristic was a poor approximation of the true inter-occlusion.

The below image is a glass chess set rendered with this technique. Note that the glass pieces are not refracting any light. 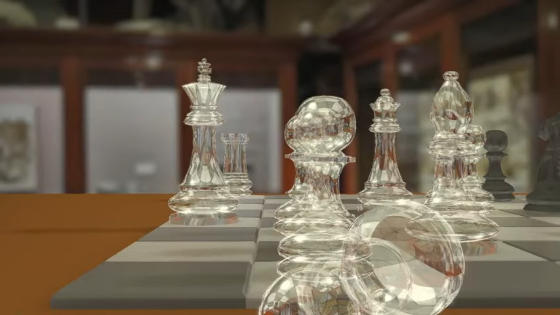 For a better understanding and a more detailed explanation of the weight function, please refer to page 5, 6 and 7 of the original paper as the Blended OIT has been implemented and improved by different methods along the years. Link to the paper is provided at the end of this article.

The primary limitation of the technique is that the weighting heuristic must be tuned for the anticipated depth range and opacity of transparent surfaces.

The technique was implemented in OpenGL for the G3D Innovation Engine and DirectX for the Unreal Engine to produce the results live and in the paper. Dan Bagnell and Patrick Cozzi implemented it in WebGL for their open-source Cesium engine (see also their blog post discussing it).

From those implementations, a good set of weighting functions were found, which are reported in the journal paper. In the paper, they also discuss how to spot artifacts from a poorly-tuned weighting function and fix them.

This technique is fairly straight forward to implement and the shader modifications are very simple. If you're familiar with how Framebuffers work in OpenGL, you're almost halfway there.

The only caveat is we need to write our code in OpenGL ^4.0 to be able to use blending to multiple render targets (e.g. utilizing ). In the paper, different ways of implementation have been discussed for libraries that do not support rendering or blending to multiple targets.

Then, render the surfaces in any order to these render targets, adding the following to the bottom of the pixel shader and using the specified blending modes:

Finally, after all surfaces have been rendered, composite the result onto the screen using a full-screen pass:

Use this table as a reference for your render targets:

A total of three rendering passes are needed to accomplish the finished result which is down below: 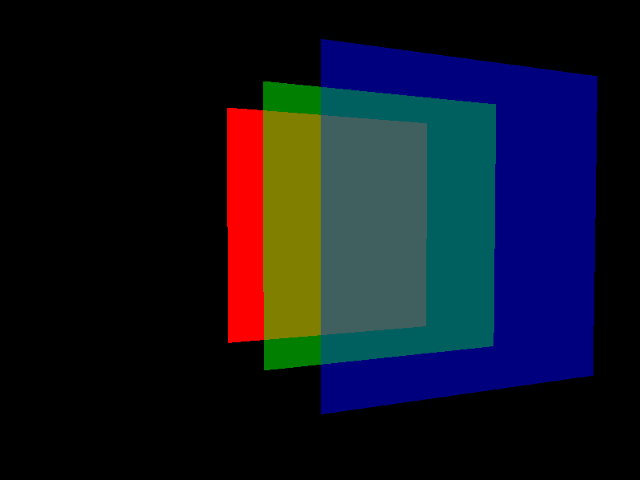 To get started, we would have to setup a quad for our solid and transparent surfaces. The red quad will be the solid one, and the green and blue will be the transparent one. Since we're using the same quad for our screen quad as well, here we define UV values for texture mapping purposes at the screen pass.

Before rendering, setup some model matrices for your quads. You can set the Z axis however you want since this is an order-independent technique and objects closer or further to the camera would not impose any problem.

At this point, we have to perform our solid pass, so configure the render states and bind the opaque framebuffer.

We have to reset our depth function and depth mask for the solid pass at every frame since pipeline changes these states further down the line.

Now, draw the solid objects using the solid shader. You can draw alpha cutout objects both at this stage and the next stage as well. The solid shader is just a simple shader that transforms the vertices and draws the mesh with the supplied color.

So far so good. For our transparent pass, like in the solid pass, configure the render states to blend to these render targets as below, then bind the transparent framebuffer and clear its two color buffers to vec4(0.0f) and vec4(1.0).

Then, draw the transparent surfaces with your preferred alpha values.

The transparent shader is where half the work is done. It's primarily a shader that collects pixel information for our composite pass:

Note that, we are directly using the color passed to the shader as our final fragment color. Normally, if you are in a lighting shader, you want to use the final result of the lighting to store in accumulation and revealage render targets.

Now that everything has been rendered, we have to these two images so we can have the finished result.

In OpenGL, we can achieve this by color blending feature:

Composite shader is where the other half of the work is done. We're basically merging two layers, one being the solid objects image and the other being the transparent objects image. Accumulation buffer tells us about the color and revealage buffer determines the visibility of the the underlying pixel:

Finally, draw your composited image (which is the opaque texture attachment since you rendered your transparent image over it in the last pass) onto the backbuffer and observe the result.

Screen shader is just a simple post-processing shader which draws a full-screen quad.

In a regular pipeline, you would also apply gamma-correction, tone-mapping, etc. in an intermediate post-processing framebuffer before you render to backbuffer, but ensure you are not applying them while rendering your solid and transparent surfaces and also not before composition since this transparency technique needs raw color values for calculating transparent pixels.

Now, the interesting part is to play with the Z axis of your objects to see order-independence in action. Try to place your transparent objects behind the solid object or mess up the orders entirely. 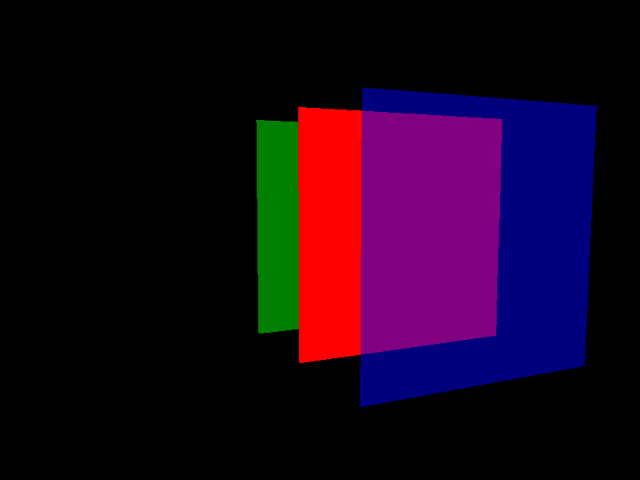 In the image above, the green quad is rendered after the red quad, but behind it, and if you move the camera around to see the green quad from behind, you won't see any artifacts.

As stated earlier, one limitation that this technique imposes is that for scenes with higher depth/alpha complexity we need to tune the weighting function to achieve the correct result. Luckily, a number of tested weighting functions are provided in the paper which you can refer and investigate them for your environment.

Be sure to also check the colored transmission transparency which is the improved version of this technique in the links below.

You can find the source code for this demo here.