This light bleeding, or glow effect, is achieved with a post-processing effect called . Bloom gives all brightly lit regions of a scene a glow-like effect. An example of a scene with and without glow can be seen below (image courtesy of Epic Games):

Bloom gives noticeable visual cues about the brightness of objects. When done in a subtle fashion (which some games drastically fail to do) Bloom significantly boosts the lighting of your scene and allows for a large range of dramatic effects.

Bloom works best in combination with HDR rendering. A common misconception is that HDR is the same as Bloom as many people use the terms interchangeably. They are however completely different techniques used for different purposes. It is possible to implement Bloom with default 8-bit precision framebuffers, just as it is possible to use HDR without the Bloom effect. It is simply that HDR makes Bloom more effective to implement (as we'll later see).

To implement Bloom, we render a lit scene as usual and extract both the scene's HDR color buffer and an image of the scene with only its bright regions visible. This extracted brightness image is then blurred and the result added on top of the original HDR scene image.

Let's illustrate this process in a step by step fashion. We render a scene filled with 4 bright light sources, visualized as colored cubes. The colored light cubes have a brightness values between 1.5 and 15.0. If we were to render this to an HDR color buffer the scene looks as follows: 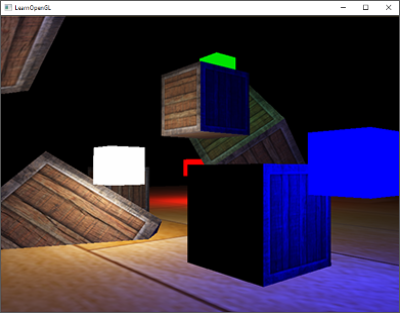 We take this HDR color buffer texture and extract all the fragments that exceed a certain brightness. This gives us an image that only show the bright colored regions as their fragment intensities exceeded a certain threshold: 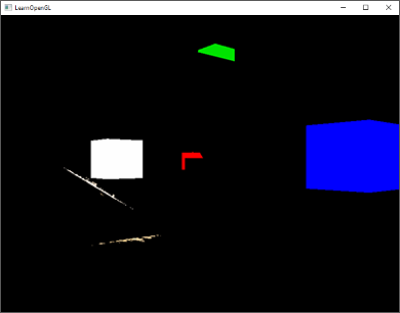 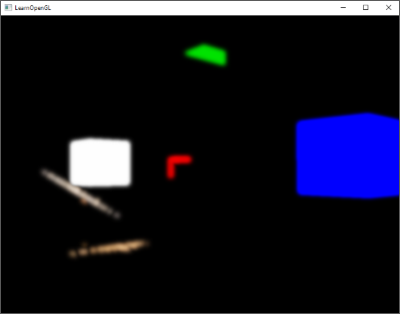 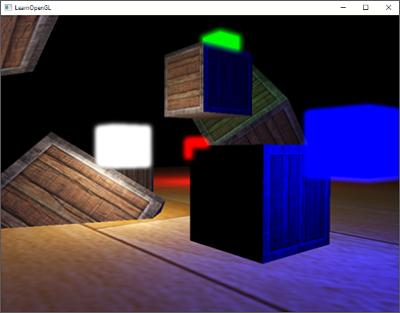 Bloom by itself isn't a complicated technique, but difficult to get exactly right. Most of its visual quality is determined by the quality and type of blur filter used for blurring the extracted brightness regions. Simply tweaking the blur filter can drastically change the quality of the Bloom effect.

Following these steps gives us the Bloom post-processing effect. The next image briefly summarizes the required steps for implementing Bloom:

The first step requires us to extract all the bright colors of a scene based on some threshold. Let's first delve into that.

We do have to explicitly tell OpenGL we're rendering to multiple colorbuffers via . OpenGL, by default, only renders to a framebuffer's first color attachment, ignoring all others. We can do this by passing an array of color attachment enums that we'd like to render to in subsequent operations:

When rendering into this framebuffer, whenever a fragment shader uses the layout location specifier, the respective color buffer is used to render the fragment to. This is great as this saves us an extra render pass for extracting bright regions as we can now directly extract them from the to-be-rendered fragment:

Here we first calculate lighting as normal and pass it to the first fragment shader's output variable FragColor. Then we use what is currently stored in FragColor to determine if its brightness exceeds a certain threshold. We calculate the brightness of a fragment by properly transforming it to grayscale first (by taking the dot product of both vectors we effectively multiply each individual component of both vectors and add the results together). If the brightness exceeds a certain threshold, we output the color to the second color buffer. We do the same for the light cubes.

This also shows why Bloom works incredibly well with HDR rendering. Because we render in high dynamic range, color values can exceed 1.0 which allows us to specify a brightness threshold outside the default range, giving us much more control over what is considered bright. Without HDR we'd have to set the threshold lower than 1.0, which is still possible, but regions are much quicker considered bright. This sometimes leads to the glow effect becoming too dominant (think of white glowing snow for example).

With an image of the extracted bright regions we now need to blur the image. We can do this with a simple box filter as we've done in the post-processing section of the framebufers chapter, but we'd rather use a more advanced (and better-looking) blur filter called .

In the post-processing chapter's blur we took the average of all surrounding pixels of an image. While it does give us an easy blur, it doesn't give the best results. A Gaussian blur is based on the Gaussian curve which is commonly described as a bell-shaped curve giving high values close to its center that gradually wear off over distance. The Gaussian curve can be mathematically represented in different forms, but generally has the following shape: 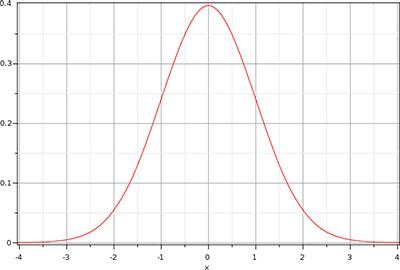 As the Gaussian curve has a larger area close to its center, using its values as weights to blur an image give more natural results as samples close by have a higher precedence. If we for instance sample a 32x32 box around a fragment, we use progressively smaller weights the larger the distance to the fragment; this gives a better and more realistic blur which is known as a .

To implement a Gaussian blur filter we'd need a two-dimensional box of weights that we can obtain from a 2 dimensional Gaussian curve equation. The problem with this approach however is that it quickly becomes extremely heavy on performance. Take a blur kernel of 32 by 32 for example, this would require us to sample a texture a total of 1024 times for each fragment!

Luckily for us, the Gaussian equation has a very neat property that allows us to separate the two-dimensional equation into two smaller one-dimensional equations: one that describes the horizontal weights and the other that describes the vertical weights. We'd then first do a horizontal blur with the horizontal weights on the scene texture, and then on the resulting texture do a vertical blur. Due to this property the results are exactly the same, but this time saving us an incredible amount of performance as we'd now only have to do 32 + 32 samples compared to 1024! This is known as .

Before we delve into the framebuffers let's first discuss the Gaussian blur's fragment shader:

Here we take a relatively small sample of Gaussian weights that we each use to assign a specific weight to the horizontal or vertical samples around the current fragment. You can see that we split the blur filter into a horizontal and vertical section based on whatever value we set the horizontal uniform. We base the offset distance on the exact size of a texel obtained by the division of 1.0 over the size of the texture (a vec2 from ).

For blurring an image we create two basic framebuffers, each with only a color buffer texture:

Each iteration we bind one of the two framebuffers based on whether we want to blur horizontally or vertically and bind the other framebuffer's color buffer as the texture to blur. The first iteration we specifically bind the texture we'd like to blur (brightnessTexture) as both color buffers would else end up empty. By repeating this process 10 times, the brightness image ends up with a complete Gaussian blur that was repeated 5 times. This construct allows us to blur any image as often as we'd like; the more Gaussian blur iterations, the stronger the blur.

By blurring the extracted brightness texture 5 times, we get a properly blurred image of all bright regions of a scene. 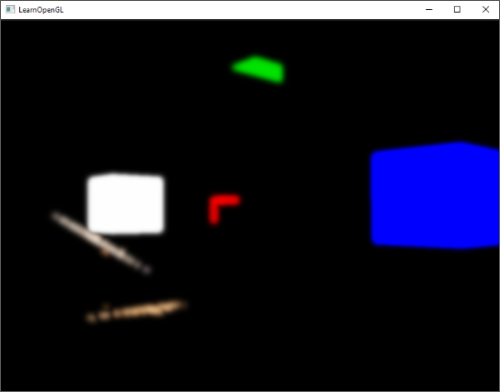 The last step to complete the Bloom effect is to combine this blurred brightness texture with the original scene's HDR texture.

With the scene's HDR texture and a blurred brightness texture of the scene we only need to combine the two to achieve the infamous Bloom or glow effect. In the final fragment shader (largely similar to the one we used in the HDR chapter) we additively blend both textures:

Interesting to note here is that we add the Bloom effect before we apply tone mapping. This way, the added brightness of bloom is also softly transformed to LDR range with better relative lighting as a result.

With both textures added together, all bright areas of our scene now get a proper glow effect: 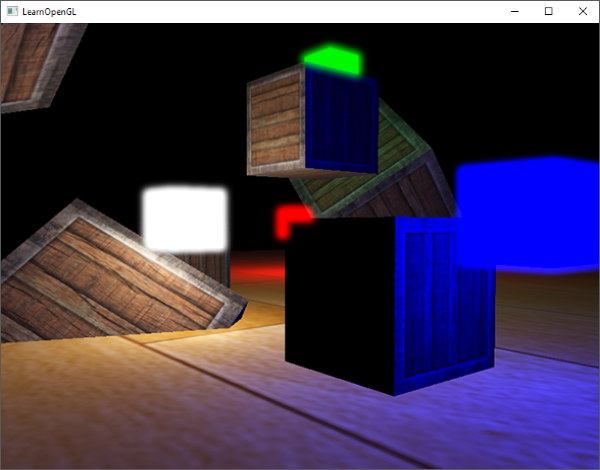 The colored cubes now appear much more bright and give a better illusion as light emitting objects. This is a relatively simple scene so the Bloom effect isn't too impressive here, but in well lit scenes it can make a significant difference when properly configured. You can find the source code of this simple demo here.

For this chapter we used a relatively simple Gaussian blur filter where we only take 5 samples in each direction. By taking more samples along a larger radius or repeating the blur filter an extra number of times we can improve the blur effect. As the quality of the blur directly correlates to the quality of the Bloom effect, improving the blur step can make a significant improvement. Some of these improvements combine blur filters with varying sized blur kernels or use multiple Gaussian curves to selectively combine weights. The additional resources from Kalogirou and Epic Games discuss how to significantly improve the Bloom effect by improving the Gaussian blur.