Somewhere in your adventurous rendering journey you probably came across some jagged saw-like patterns along the edges of your models. The reason these appear is due to how the rasterizer transforms the vertex data into actual fragments behind the scene. An example of what these jagged edges look like can already be seen when drawing a simple cube: 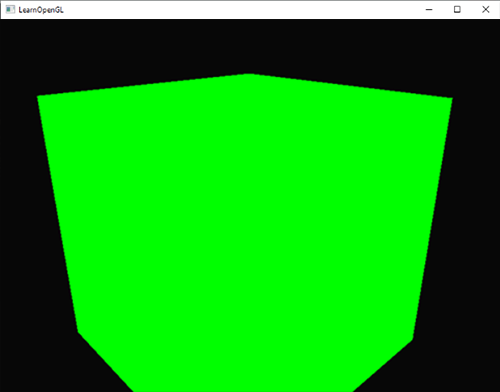 While not immediately visible, if you take a closer look at the edges of the cube you'll see a jagged pattern. If we zoom in you'd see the following:

This is clearly not something we want in a final version of an application. This effect, of clearly seeing the pixel formations an edge is composed of, is called . There are quite a few techniques out there called techniques that fight this aliasing behavior by producing smoother edges.

At first we had a technique called (SSAA) that temporarily uses a much higher resolution render buffer to render the scene in (super sampling). Then when the full scene is rendered, the resolution is downsampled back to the normal resolution. This extra resolution was used to prevent these jagged edges. While it did provide us with a solution to the aliasing problem, it came with a major performance drawback since we have to draw a lot more fragments than usual. This technique therefore only had a short glory moment.

This technique did give birth to a more modern technique called or MSAA that borrows from the concepts behind SSAA while implementing a much more efficient approach. In this chapter we'll be extensively discussing this MSAA technique that is built-in in OpenGL.

To understand what multisampling is and how it works into solving the aliasing problem we first need to delve a bit further into the inner workings of OpenGL's rasterizer.

The rasterizer is the combination of all algorithms and processes that sit between your final processed vertices and the fragment shader. The rasterizer takes all vertices belonging to a single primitive and transforms this to a set of fragments. Vertex coordinates can theoretically have any coordinate, but fragments can't since they are bound by the resolution of your screen. There will almost never be a one-on-one mapping between vertex coordinates and fragments, so the rasterizer has to determine in some way what fragment/screen-coordinate each specific vertex will end up at. 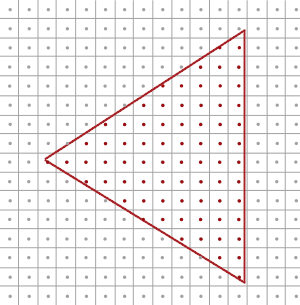 You can probably already figure out the origin of aliasing right now. The complete rendered version of the triangle would look like this on your screen: 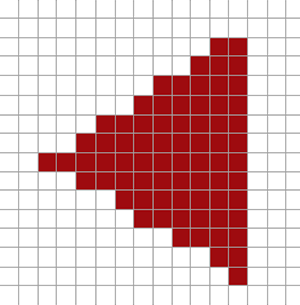 Due to the limited amount of screen pixels, some pixels will be rendered along an edge and some won't. The result is that we're rendering primitives with non-smooth edges giving rise to the jagged edges we've seen before.

What multisampling does, is not use a single sampling point for determining coverage of the triangle, but multiple sample points (guess where it got its name from). Instead of a single sample point at the center of each pixel we're going to place 4 in a general pattern and use those to determine pixel coverage.

This is where multisampling becomes interesting. We determined that 2 subsamples were covered by the triangle so the next step is to determine a color for this specific pixel. Our initial guess would be that we run the fragment shader for each covered subsample and later average the colors of each subsample per pixel. In this case we'd run the fragment shader twice on the interpolated vertex data at each subsample and store the resulting color in those sample points. This is (fortunately) not how it works, because this would mean we need to run a lot more fragment shaders than without multisampling, drastically reducing performance.

How MSAA really works is that the fragment shader is only run once per pixel (for each primitive) regardless of how many subsamples the triangle covers; the fragment shader runs with the vertex data interpolated to the center of the pixel. MSAA then uses a larger depth/stencil buffer to determine subsample coverage. The number of subsamples covered determines how much the pixel color contributes to the framebuffer. Because only 2 of the 4 samples were covered in the previous image, half of the triangle's color is mixed with the framebuffer color (in this case the clear color) resulting in a light blue-ish color.

The result is a higher resolution buffer (with higher resolution depth/stencil) where all the primitive edges now produce a smoother pattern. Let's see what multisampling looks like when we determine the coverage of the earlier triangle: 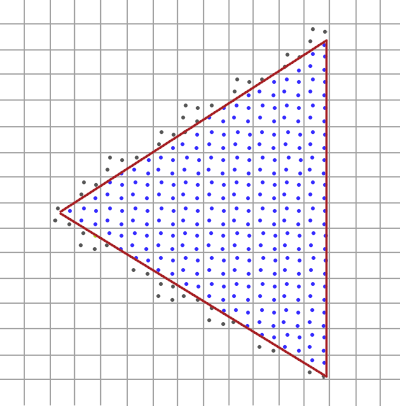 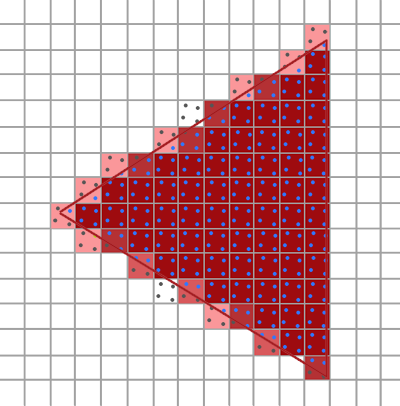 The hard edges of the triangle are now surrounded by colors slightly lighter than the actual edge color, which causes the edge to appear smooth when viewed from a distance.

Depth and stencil values are stored per subsample and, even though we only run the fragment shader once, color values are stored per subsample as well for the case of multiple triangles overlapping a single pixel. For depth testing the vertex's depth value is interpolated to each subsample before running the depth test, and for stencil testing we store the stencil values per subsample. This does mean that the size of the buffers are now increased by the amount of subsamples per pixel.

If we want to use MSAA in OpenGL we need to use a buffer that is able to store more than one sample value per pixel. We need a new type of buffer that can store a given amount of multisamples and this is called a .

When we now call we create a rendering window, but this time with a buffer containing 4 subsamples per screen coordinate. This does mean that the size of the buffer is increased by 4.

Now that we asked GLFW for multisampled buffers we need to enable multisampling by calling with GL_MULTISAMPLE. On most OpenGL drivers, multisampling is enabled by default so this call is then a bit redundant, but it's usually a good idea to enable it anyways. This way all OpenGL implementations have multisampling enabled.

Because the actual multisampling algorithms are implemented in the rasterizer in your OpenGL drivers there's not much else we need to do. If we now were to render the green cube from the start of this chapter we should see smoother edges: 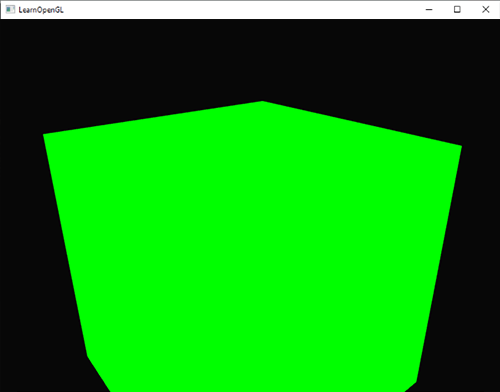 The cube does indeed look a lot smoother and the same will apply for any other object you're drawing in your scene. You can find the source code for this simple example here.

To create a texture that supports storage of multiple sample points we use instead of that accepts GL_TEXTURE_2D_MULTISAPLE as its texture target:

The second argument sets the number of samples we'd like the texture to have. If the last argument is set to GL_TRUE, the image will use identical sample locations and the same number of subsamples for each texel.

To attach a multisampled texture to a framebuffer we use , but this time with GL_TEXTURE_2D_MULTISAMPLE as the texture type:

The currently bound framebuffer now has a multisampled color buffer in the form of a texture image.

Like textures, creating a multisampled renderbuffer object isn't difficult. It is even quite easy since all we need to change is to when we configure the (currently bound) renderbuffer's memory storage:

The one thing that changed here is the extra second parameter where we set the amount of samples we'd like to use; 4 in this particular case.

Rendering to a multisampled framebuffer is straightforward. Whenever we draw anything while the framebuffer object is bound, the rasterizer will take care of all the multisample operations. However, because a multisampled buffer is a bit special, we can't directly use the buffer for other operations like sampling it in a shader.

A multisampled image contains much more information than a normal image so what we need to do is downscale or the image. Resolving a multisampled framebuffer is generally done through that copies a region from one framebuffer to the other while also resolving any multisampled buffers.

transfers a given region defined by 4 screen-space coordinates to a given region also defined by 4 screen-space coordinates. You may remember from the framebuffers chapter that if we bind to GL_FRAMEBUFFER we're binding to both the read and draw framebuffer targets. We could also bind to those targets individually by binding framebuffers to GL_READ_FRAMEBUFFER and GL_DRAW_FRAMEBUFFER respectively. The function reads from those two targets to determine which is the source and which is the target framebuffer. We could then transfer the multisampled framebuffer output to the actual screen by the image to the default framebuffer like so:

If we then were to render the same application we should get the same output: a lime-green cube displayed with MSAA and again showing significantly less jagged edges:

If we then implement this into the post-processing code of the framebuffers chapter we're able to create all kinds of cool post-processing effects on a texture of a scene with (almost) no jagged edges. With a grayscale postprocessing filter applied it'll look something like this: 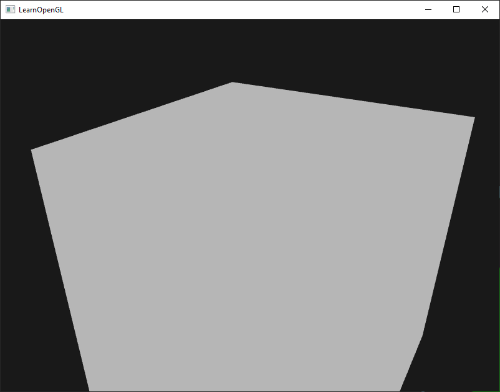 You can see that when we want to combine multisampling with off-screen rendering we need to take care of some extra steps. The steps are worth the extra effort though since multisampling significantly boosts the visual quality of your scene. Do note that enabling multisampling can noticeably reduce performance the more samples you use.

It is possible to directly pass a multisampled texture image to a fragment shader instead of first resolving it. GLSL gives us the option to sample the texture image per subsample so we can create our own custom anti-aliasing algorithms.

To get a texture value per subsample you'd have to define the texture uniform sampler as a instead of the usual :

Using the function it is then possible to retrieve the color value per sample:

We won't go into the details of creating custom anti-aliasing techniques here, but this may be enough to get started on building one yourself.