As mentioned in the Hello Triangle chapter, shaders are little programs that rest on the GPU. These programs are run for each specific section of the graphics pipeline. In a basic sense, shaders are nothing more than programs transforming inputs to outputs. Shaders are also very isolated programs in that they're not allowed to communicate with each other; the only communication they have is via their inputs and outputs.

In the previous chapter we briefly touched the surface of shaders and how to properly use them. We will now explain shaders, and specifically the OpenGL Shading Language, in a more general fashion.

Shaders are written in the C-like language GLSL. GLSL is tailored for use with graphics and contains useful features specifically targeted at vector and matrix manipulation.

A shader typically has the following structure:

When we're talking specifically about the vertex shader each input variable is also known as a . There is a maximum number of vertex attributes we're allowed to declare limited by the hardware. OpenGL guarantees there are always at least 16 4-component vertex attributes available, but some hardware may allow for more which you can retrieve by querying GL_MAX_VERTEX_ATTRIBS:

This often returns the minimum of 16 which should be more than enough for most purposes.

GLSL has, like any other programming language, data types for specifying what kind of variable we want to work with. GLSL has most of the default basic types we know from languages like C: int, float, double, uint and bool. GLSL also features two container types that we'll be using a lot, namely vectors and matrices. We'll discuss matrices in a later chapter.

A vector in GLSL is a 1,2,3 or 4 component container for any of the basic types just mentioned. They can take the following form (n represents the number of components):

Most of the time we will be using the basic vecn since floats are sufficient for most of our purposes.

Components of a vector can be accessed via vec.x where x is the first component of the vector. You can use .x, .y, .z and .w to access their first, second, third and fourth component respectively. GLSL also allows you to use rgba for colors or stpq for texture coordinates, accessing the same components.

The vector datatype allows for some interesting and flexible component selection called . Swizzling allows us to use syntax like this:

You can use any combination of up to 4 letters to create a new vector (of the same type) as long as the original vector has those components; it is not allowed to access the .z component of a vec2 for example. We can also pass vectors as arguments to different vector constructor calls, reducing the number of arguments required:

Vectors are thus a flexible datatype that we can use for all kinds of input and output. Throughout the book you'll see plenty of examples of how we can creatively manage vectors.

Shaders are nice little programs on their own, but they are part of a whole and for that reason we want to have inputs and outputs on the individual shaders so that we can move stuff around. GLSL defined the in and out keywords specifically for that purpose. Each shader can specify inputs and outputs using those keywords and wherever an output variable matches with an input variable of the next shader stage they're passed along. The vertex and fragment shader differ a bit though.

So if we want to send data from one shader to the other we'd have to declare an output in the sending shader and a similar input in the receiving shader. When the types and the names are equal on both sides OpenGL will link those variables together and then it is possible to send data between shaders (this is done when linking a program object). To show you how this works in practice we're going to alter the shaders from the previous chapter to let the vertex shader decide the color for the fragment shader. 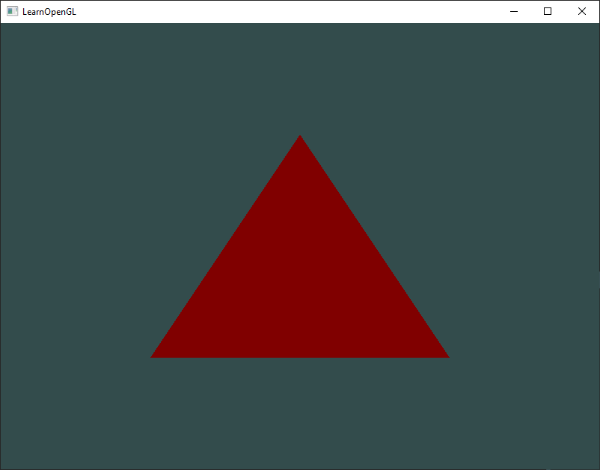 are another way to pass data from our application on the CPU to the shaders on the GPU. Uniforms are however slightly different compared to vertex attributes. First of all, uniforms are . Global, meaning that a uniform variable is unique per shader program object, and can be accessed from any shader at any stage in the shader program. Second, whatever you set the uniform value to, uniforms will keep their values until they're either reset or updated.

To declare a uniform in GLSL we simply add the uniform keyword to a shader with a type and a name. From that point on we can use the newly declared uniform in the shader. Let's see if this time we can set the color of the triangle via a uniform:

First, we retrieve the running time in seconds via . Then we vary the color in the range of 0.0 - 1.0 by using the function and store the result in greenValue.

Now that we know how to set the values of uniform variables, we can use them for rendering. If we want the color to gradually change, we want to update this uniform every frame, otherwise the triangle would maintain a single solid color if we only set it once. So we calculate the greenValue and update the uniform each render iteration:

The code is a relatively straightforward adaptation of the previous code. This time, we update a uniform value each frame before drawing the triangle. If you update the uniform correctly you should see the color of your triangle gradually change from green to black and back to green.

As you can see, uniforms are a useful tool for setting attributes that may change every frame, or for interchanging data between your application and your shaders, but what if we want to set a color for each vertex? In that case we'd have to declare as many uniforms as we have vertices. A better solution would be to include more data in the vertex attributes which is what we're going to do now.

We saw in the previous chapter how we can fill a VBO, configure vertex attribute pointers and store it all in a VAO. This time, we also want to add color data to the vertex data. We're going to add color data as 3 floats to the vertices array. We assign a red, green and blue color to each of the corners of our triangle respectively:

Since we now have more data to send to the vertex shader, it is necessary to adjust the vertex shader to also receive our color value as a vertex attribute input. Note that we set the location of the aColor attribute to 1 with the layout specifier:

Since we no longer use a uniform for the fragment's color, but now use the ourColor output variable we'll have to change the fragment shader as well:

Knowing the current layout we can update the vertex format with :

The first few arguments of are relatively straightforward. This time we are configuring the vertex attribute on attribute location 1. The color values have a size of 3 floats and we do not normalize the values.

Running the application should result in the following image:

The image may not be exactly what you would expect, since we only supplied 3 colors, not the huge color palette we're seeing right now. This is all the result of something called in the fragment shader. When rendering a triangle the rasterization stage usually results in a lot more fragments than vertices originally specified. The rasterizer then determines the positions of each of those fragments based on where they reside on the triangle shape.
Based on these positions, it all the fragment shader's input variables. Say for example we have a line where the upper point has a green color and the lower point a blue color. If the fragment shader is run at a fragment that resides around a position at 70% of the line, its resulting color input attribute would then be a linear combination of green and blue; to be more precise: 30% blue and 70% green.

This is exactly what happened at the triangle. We have 3 vertices and thus 3 colors, and judging from the triangle's pixels it probably contains around 50000 fragments, where the fragment shader interpolated the colors among those pixels. If you take a good look at the colors you'll see it all makes sense: red to blue first gets to purple and then to blue. Fragment interpolation is applied to all the fragment shader's input attributes.

Our own shader class

Writing, compiling and managing shaders can be quite cumbersome. As a final touch on the shader subject we're going to make our life a bit easier by building a shader class that reads shaders from disk, compiles and links them, checks for errors and is easy to use. This also gives you a bit of an idea how we can encapsulate some of the knowledge we learned so far into useful abstract objects.

We will create the shader class entirely in a header file, mainly for learning purposes and portability. Let's start by adding the required includes and by defining the class structure:

The shader class holds the ID of the shader program. Its constructor requires the file paths of the source code of the vertex and fragment shader respectively that we can store on disk as simple text files. To add a little extra we also add several utility functions to ease our lives a little: activates the shader program, and all functions query a uniform location and set its value.

We're using C++ filestreams to read the content from the file into several string objects:

Next we need to compile and link the shaders. Note that we're also reviewing if compilation/linking failed and if so, print the compile-time errors. This is extremely useful when debugging (you are going to need those error logs eventually):

The function is straightforward:

Similarly for any of the uniform setter functions:

And there we have it, a completed shader class. Using the shader class is fairly easy; we create a shader object once and from that point on simply start using it:

Here we stored the vertex and fragment shader source code in two files called shader.vs and shader.fs. You're free to name your shader files however you like; I personally find the extensions .vs and .fs quite intuitive.

You can find the source code here using our newly created shader class. Note that you can click the shader file paths to find the shaders' source code.