Say you have a scene where you're drawing a lot of models where most of these models contain the same set of vertex data, but with different world transformations. Think of a scene filled with grass leaves: each grass leave is a small model that consists of only a few triangles. You'll probably want to draw quite a few of them and your scene may end up with thousands or maybe tens of thousands of grass leaves that you need to render each frame. Because each leaf is only a few triangles, the leaf is rendered almost instantly. However, the thousands of render calls you'll have to make will drastically reduce performance.

If we were to actually render such a large amount of objects it will look a bit like this in code:

When drawing many of your model like this you'll quickly reach a performance bottleneck because of the many draw calls. Compared to rendering the actual vertices, telling the GPU to render your vertex data with functions like or eats up quite some performance since OpenGL must make necessary preparations before it can draw your vertex data (like telling the GPU which buffer to read data from, where to find vertex attributes and all this over the relatively slow CPU to GPU bus). So even though rendering your vertices is super fast, giving your GPU the commands to render them isn't.

It would be much more convenient if we could send data over to the GPU once, and then tell OpenGL to draw multiple objects using this data with a single drawing call. Enter .

Instancing is a technique where we draw many (equal mesh data) objects at once with a single render call, saving us all the CPU -> GPU communications each time we need to render an object. To render using instancing all we need to do is change the render calls and to and respectively. These instanced versions of the classic rendering functions take an extra parameter called the that sets the number of instances we want to render. We sent all the required data to the GPU once, and then tell the GPU how it should draw all these instances with a single call. The GPU then renders all these instances without having to continually communicate with the CPU.

By itself this function is a bit useless. Rendering the same object a thousand times is of no use to us since each of the rendered objects is rendered exactly the same and thus also at the same location; we would only see one object! For this reason GLSL added another built-in variable in the vertex shader called gl_InstanceID.

When drawing with one of the instanced rendering calls, gl_InstanceID is incremented for each instance being rendered starting from 0. If we were to render the 43th instance for example, gl_InstanceID would have the value 42 in the vertex shader. Having a unique value per instance means we could now for example index into a large array of position values to position each instance at a different location in the world.

To get a feel for instanced drawing we're going to demonstrate a simple example that renders a hundred 2D quads in normalized device coordinates with just one render call. We accomplish this by uniquely positioning each instanced quad by indexing a uniform array of 100 offset vectors. The result is a neatly organized grid of quads that fill the entire window: 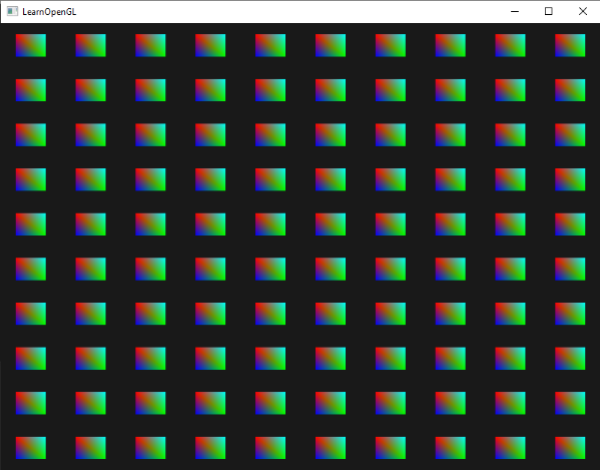 Each quad consists of 2 triangles with a total of 6 vertices. Each vertex contains a 2D NDC position vector and a color vector. Below is the vertex data used for this example - the triangles are small enough to properly fit the screen when there's a 100 of them:

The quads are colored in the fragment shader that receives a color vector from the vertex shader and sets it as its output:

Nothing new so far, but at the vertex shader it's starting to get interesting:

Here we defined a uniform array called offsets that contain a total of 100 offset vectors. Within the vertex shader we retrieve an offset vector for each instance by indexing the offsets array using gl_InstanceID. If we now were to draw 100 quads with instanced drawing we'd get 100 quads located at different positions.

We do need to actually set the offset positions that we calculate in a nested for-loop before we enter the render loop:

Here we create a set of 100 translation vectors that contains an offset vector for all positions in a 10x10 grid. In addition to generating the translations array, we'd also need to transfer the data to the vertex shader's uniform array:

Within this snippet of code we transform the for-loop counter i to a to dynamically create a location string for querying the uniform location. For each item in the offsets uniform array we then set the corresponding translation vector.

Now that all the preparations are finished we can start rendering the quads. To draw via instanced rendering we call or . Since we're not using an element index buffer we're going to call the version:

The parameters of are exactly the same as except the last parameter that sets the number of instances we want to draw. Since we want to display 100 quads in a 10x10 grid we set it equal to 100. Running the code should now give you the familiar image of 100 colorful quads.

While the previous implementation works fine for this specific use case, whenever we are rendering a lot more than 100 instances (which is quite common) we will eventually hit a limit on the amount of uniform data we can send to the shaders. One alternative option is known as . Instanced arrays are defined as a vertex attribute (allowing us to store much more data) that are updated per instance instead of per vertex.

To give you an example of an instanced array we're going to take the previous example and convert the offset uniform array to an instanced array. We'll have to update the vertex shader by adding another vertex attribute:

We no longer use gl_InstanceID and can directly use the offset attribute without first indexing into a large uniform array.

Because an instanced array is a vertex attribute, just like the position and color variables, we need to store its content in a vertex buffer object and configure its attribute pointer. We're first going to store the translations array (from the previous section) in a new buffer object:

If we now were to render the quads again with we'd get the following output:

This is exactly the same as the previous example, but now with instanced arrays, which allows us to pass a lot more data (as much as memory allows us) to the vertex shader for instanced drawing.

For fun we could slowly downscale each quad from top-right to bottom-left using gl_InstanceID again, because why not?

The result is that the first instances of the quads are drawn extremely small and the further we're in the process of drawing the instances, the closer gl_InstanceID gets to 100 and thus the more the quads regain their original size. It's perfectly legal to use instanced arrays together with gl_InstanceID like this. 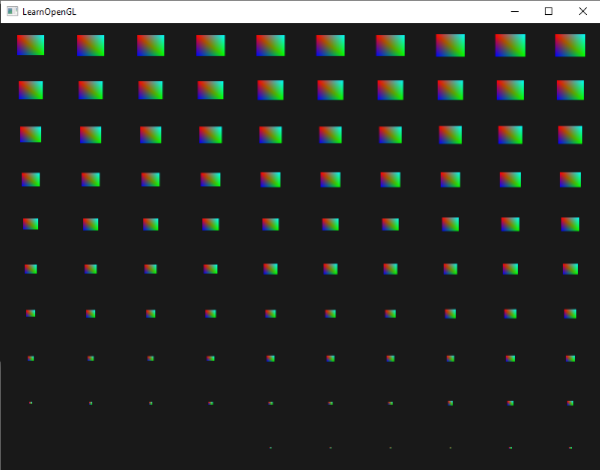 If you're still a bit unsure about how instanced rendering works or want to see how everything fits together you can find the full source code of the application here.

While fun and all, these examples aren't really good examples of instancing. Yes, they do give you an easy overview of how instancing works, but instancing gets most of its power when drawing an enormous amount of similar objects. For that reason we're going to venture into space.

Imagine a scene where we have one large planet that's at the center of a large asteroid ring. Such an asteroid ring could contain thousands or tens of thousands of rock formations and quickly becomes un-renderable on any decent graphics card. This scenario proves itself particularly useful for instanced rendering, since all the asteroids can be represented with a single model. Each single asteroid then gets its variation from a transformation matrix unique to each asteroid.

To demonstrate the impact of instanced rendering we're first going to render a scene of asteroids hovering around a planet without instanced rendering. The scene will contain a large planet model that can be downloaded from here and a large set of asteroid rocks that we properly position around the planet. The asteroid rock model can be downloaded here.

This piece of code may look a little daunting, but we basically transform the x and z position of the asteroid along a circle with a radius defined by radius and randomly displace each asteroid a little around the circle by -offset and offset. We give the y displacement less of an impact to create a more flat asteroid ring. Then we apply scale and rotation transformations and store the resulting transformation matrix in modelMatrices that is of size amount. Here we generate 1000 model matrices, one per asteroid.

After loading the planet and rock models and compiling a set of shaders, the rendering code then looks a bit like this:

First we draw the planet model, that we translate and scale a bit to accommodate the scene, and then we draw a number of rock models equal to the amount of transformations we generated previously. Before we draw each rock however, we first set the corresponding model transformation matrix within the shader.

The result is then a space-like scene where we can see a natural-looking asteroid ring around a planet: 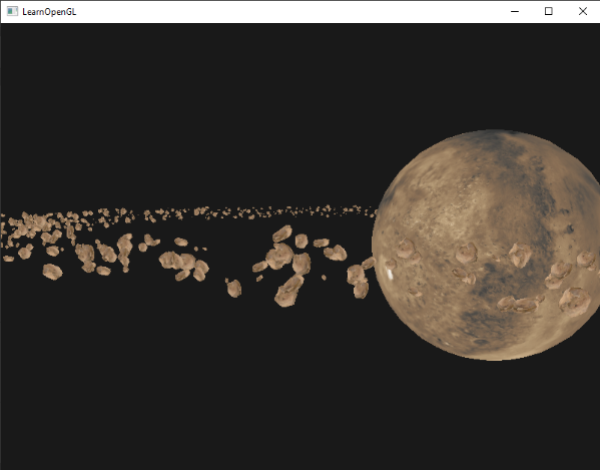 This scene contains a total of 1001 rendering calls per frame of which 1000 are of the rock model. You can find the source code for this scene here.

As soon as we start to increase this number we will quickly notice that the scene stops running smoothly and the number of frames we're able to render per second reduces drastically. As soon as we set amount to something close to 2000 the scene already becomes so slow on our GPU that it becomes difficult to move around.

Let's now try to render the same scene, but this time with instanced rendering. We first need to adjust the vertex shader a little:

We then have to set each of the attribute pointers of those 4 vertex attributes and configure them as instanced arrays:

Note that we cheated a little by declaring the VAO variable of the as a public variable instead of a private variable so we could access its vertex array object. This is not the cleanest solution, but just a simple modification to suit this example. Aside from the little hack, this code should be clear. We're basically declaring how OpenGL should interpret the buffer for each of the matrix's vertex attributes and that each of those vertex attributes is an instanced array.

Next we take the VAO of the mesh(es) again and this time draw using : 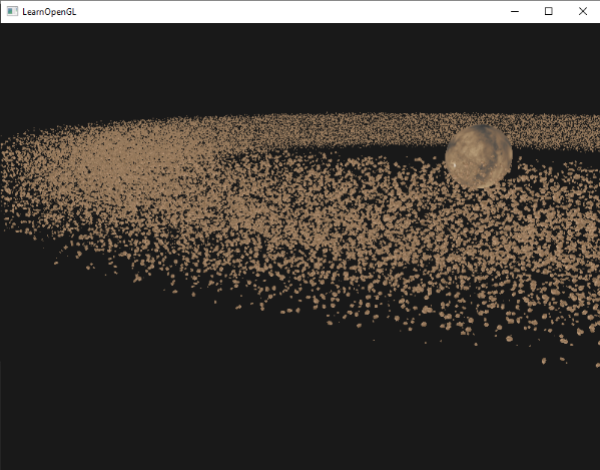 This image was rendered with 100000 asteroids with a radius of 150.0f and an offset equal to 25.0f. You can find the source code of the instanced rendering demo here.