Now it is time to get our hands dirty with Assimp and start creating the actual loading and translation code. The goal of this chapter is to create another class that represents a model in its entirety, that is, a model that contains multiple meshes, possibly with multiple textures. A house, that contains a wooden balcony, a tower, and perhaps a swimming pool, could still be loaded as a single model. We'll load the model via Assimp and translate it to multiple objects we've created in the previous chapter.

Without further ado, I present you the class structure of the class:

The class contains a vector of objects and requires us to give it a file location in its constructor. It then loads the file right away via the function that is called in the constructor. The private functions are all designed to process a part of Assimp's import routine and we'll cover them shortly. We also store the directory of the file path that we'll later need when loading textures.

The function is nothing special and basically loops over each of the meshes to call their respective function:

Importing a 3D model into OpenGL

To import a model and translate it to our own structure, we first need to include the appropriate headers of Assimp:

The first function we're calling is , that's directly called from the constructor. Within , we use Assimp to load the model into a data structure of Assimp called a scene object. You may remember from the first chapter of the model loading series that this is the root object of Assimp's data interface. Once we have the scene object, we can access all the data we need from the loaded model.

The great thing about Assimp is that it neatly abstracts from all the technical details of loading all the different file formats and does all this with a single one-liner:

We first declare an object from Assimp's namespace and then call its function. The function expects a file path and several options as its second argument. Assimp allows us to specify several options that forces Assimp to do extra calculations/operations on the imported data. By setting aiProcess_Triangulate we tell Assimp that if the model does not (entirely) consist of triangles, it should transform all the model's primitive shapes to triangles first. The aiProcess_FlipUVs flips the texture coordinates on the y-axis where necessary during processing (you may remember from the Textures chapter that most images in OpenGL were reversed around the y-axis; this little postprocessing option fixes that for us). A few other useful options are:

Assimp provides a great set of postprocessing options and you can find all of them here. Loading a model via Assimp is (as you can see) surprisingly easy. The hard work is in using the returned scene object to translate the loaded data to an array of Mesh objects.

The complete function is listed here:

After we load the model, we check if the scene and the root node of the scene are not null and check one of its flags to see if the returned data is incomplete. If any of these error conditions are met, we report the error retrieved from the importer's function and return. We also retrieve the directory path of the given file path.

As you may remember from Assimp's structure, each node contains a set of mesh indices where each index points to a specific mesh located in the scene object. We thus want to retrieve these mesh indices, retrieve each mesh, process each mesh, and then do this all again for each of the node's children nodes. The content of the function is shown below:

We first check each of the node's mesh indices and retrieve the corresponding mesh by indexing the scene's mMeshes array. The returned mesh is then passed to the function that returns a object that we can store in the meshes list/vector.

Once all the meshes have been processed, we iterate through all of the node's children and call the same function for each its children. Once a node no longer has any children, the recursion stops.

The next step is to process Assimp's data into the class from the previous chapter.

Translating an aiMesh object to a mesh object of our own is not too difficult. All we need to do, is access each of the mesh's relevant properties and store them in our own object. The general structure of the function then becomes:

Processing a mesh is a 3-part process: retrieve all the vertex data, retrieve the mesh's indices, and finally retrieve the relevant material data. The processed data is stored in one of the 3 vectors and from those a is created and returned to the function's caller.

Retrieving the vertex data is pretty simple: we define a struct that we add to the vertices array after each loop iteration. We loop for as much vertices there exist within the mesh (retrieved via mesh->mNumVertices). Within the iteration we want to fill this struct with all the relevant data. For vertex positions this is done as follows:

Note that we define a temporary vec3 for transferring Assimp's data to. This is necessary as Assimp maintains its own data types for vector, matrices, strings etc. and they don't convert that well to glm's data types.

The procedure for normals should come as no surprise now:

The vertex struct is now completely filled with the required vertex attributes and we can push it to the back of the vertices vector at the end of the iteration. This process is repeated for each of the mesh's vertices.

Assimp's interface defines each mesh as having an array of faces, where each face represents a single primitive, which in our case (due to the aiProcess_Triangulate option) are always triangles. A face contains the indices of the vertices we need to draw in what order for its primitive. So if we iterate over all the faces and store all the face's indices in the indices vector we're all set:

After the outer loop has finished, we now have a complete set of vertices and index data for drawing the mesh via . However, to finish the discussion and to add some detail to the mesh, we want to process the mesh's material as well.

Similar to nodes, a mesh only contains an index to a material object. To retrieve the material of a mesh, we need to index the scene's mMaterials array. The mesh's material index is set in its mMaterialIndex property, which we can also query to check if the mesh contains a material or not:

We first retrieve the aiMaterial object from the scene's mMaterials array. Then we want to load the mesh's diffuse and/or specular textures. A material object internally stores an array of texture locations for each texture type. The different texture types are all prefixed with aiTextureType_. We use a helper function called to retrieve, load, and initialize the textures from the material. The function returns a vector of structs that we store at the end of the model's textures vector.

The function iterates over all the texture locations of the given texture type, retrieves the texture's file location and then loads and generates the texture and stores the information in a struct. It looks like this:

We first check the amount of textures stored in the material via its function that expects one of the texture types we've given. We retrieve each of the texture's file locations via the function that stores the result in an aiString. We then use another helper function called that loads a texture (with stb_image.h) for us and returns the texture's ID. You can check the complete code listing at the end for its content if you're not sure how such a function is written.

And that is all there is to importing a model with Assimp.

We're not completely done yet, since there is still a large (but not completely necessary) optimization we want to make. Most scenes re-use several of their textures onto several meshes; think of a house again that has a granite texture for its walls. This texture could also be applied to the floor, its ceilings, the staircase, perhaps a table, and maybe even a small well close by. Loading textures is not a cheap operation and in our current implementation a new texture is loaded and generated for each mesh, even though the exact same texture could have been loaded several times before. This quickly becomes the bottleneck of your model loading implementation.

So we're going to add one small tweak to the model code by storing all of the loaded textures globally. Wherever we want to load a texture, we first check if it hasn't been loaded already. If so, we take that texture and skip the entire loading routine, saving us a lot of processing power. To be able to compare textures we need to store their path as well:

Then we store all the loaded textures in another vector declared at the top of the model's class file as a private variable:

In the function, we want to compare the texture path with all the textures in the textures_loaded vector to see if the current texture path equals any of those. If so, we skip the texture loading/generation part and simply use the located texture struct as the mesh's texture. The (updated) function is shown below:

You can find the complete source code of the class here.

So let's give our implementation a spin by actually importing a model created by genuine artists, not something done by the creative genius that I am. Because I don't want to give myself too much credit, I'll occasionally allow some other artists to join the ranks and this time we're going to load this amazing Survival Guitar Backpack by Berk Gedik. I've modified the material and paths a bit so it works directly with the way we've set up the model loading. The model is exported as a .obj file together with a .mtl file that links to the model's diffuse, specular, and normal maps (we'll get to those later). You can download the adjusted model for this chapter here. Note that there's a few extra texture types we won't be using yet, and that all the textures and the model file(s) should be located in the same directory for the textures to load.

Now, declare a object and pass in the model's file location. The model should then automatically load and (if there were no errors) render the object in the render loop using its function and that is it. No more buffer allocations, attribute pointers, and render commands, just a simple one-liner. If you create a simple set of shaders where the fragment shader only outputs the object's diffuse texture, the result looks a bit like this: 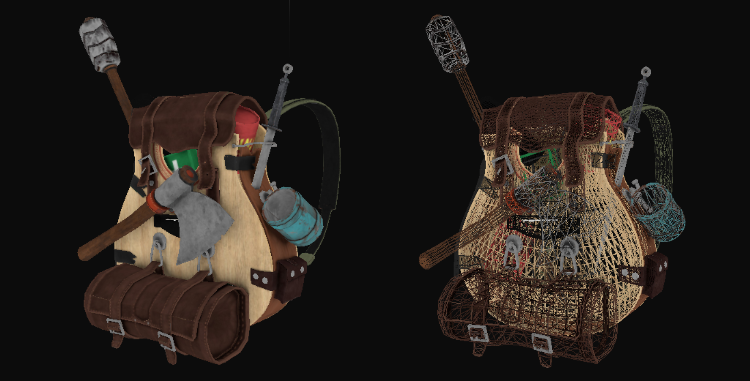 You can find the complete source code here. Note that we tell stb_image.h to flip textures vertically, if you haven't done so already, before we load the model. Otherwise the textures will look all messed up.

We can also get more creative and introduce point lights to the render equation as we learned from the Lighting chapters and together with specular maps get amazing results: 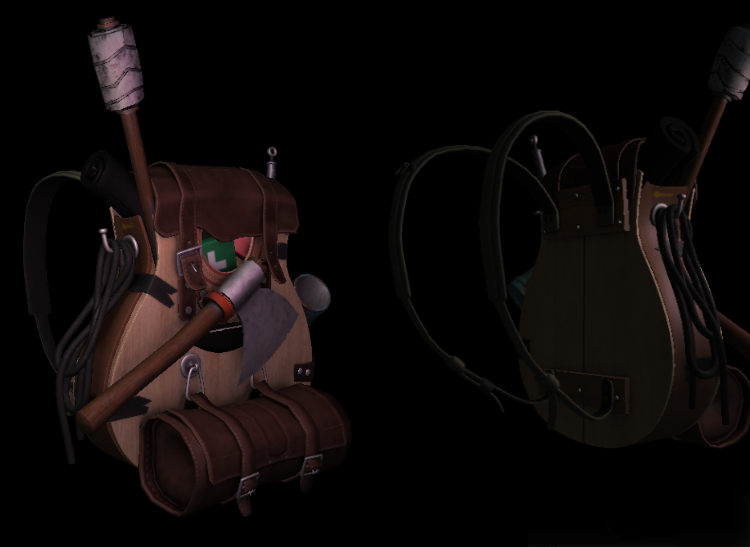 Even I have to admit that this is maybe a bit more fancy than the containers we've used so far. Using Assimp you can load tons of models found over the internet. There are quite a few resource websites that offer free 3D models for you to download in several file formats. Do note that some models still won't load properly, have texture paths that won't work, or are simply exported in a format even Assimp can't read.