In all the scenes so far we've been extensively abusing our little container friend in many ways, but over time even our best friends could get a little boring. In practical graphics applications there are usually lots of complicated and interesting models that are much prettier to look at than a static container. However, unlike the container object, we can't really manually define all the vertices, normals and texture coordinates of complicated shapes like houses, vehicles or human-like characters. What we want instead is to import these models into the application; models that were carefully designed by 3D artists in tools like Blender, 3DS Max or Maya.

These so called allow artists to create complicated shapes and apply textures to them via a process called . The tools then automatically generate all the vertex coordinates, vertex normals and texture coordinates while exporting them to a model file format. This way, artists have an extensive toolkit to create high quality models without having to care too much about the technical details. All the technical aspects are hidden in the exported model file. We, as graphics programmers, do have to care about these technical details though.

It is thus our job to parse these exported model files and extract all the relevant information so we can store them in a format that OpenGL understands. A common issue is however that there are dozens of different file formats where each exports the model data in its own unique way. Model formats like the Wavefront .obj only contains model data with minor material information like model colors and diffuse/specular maps, while model formats like the XML-based Collada file format are extremely extensive and contain models, lights, many types of materials, animation data, cameras, complete scene information and much more. The wavefront object format is generally considered to be an easy-to-parse model format. It is recommended to visit the Wavefront's wiki page at least once to see how such a file format's data is structured. This should give you a basic perception of how model file formats are generally structured.

A very popular model importing library out there is called Assimp that stands for Open Asset Import Library. Assimp is able to import dozens of different model file formats (and export to some as well) by loading all the model's data into Assimp's generalized data structures. As soon as Assimp has loaded the model, we can retrieve all the data we need from Assimp's data structures. Because the data structure of Assimp stays the same, regardless of the type of file format we imported, it abstracts us from all the different file formats out there.

When importing a model via Assimp it loads the entire model into a scene object that contains all the data of the imported model/scene. Assimp then has a collection of nodes where each node contains indices to data stored in the scene object where each node can have any number of children. A (simplistic) model of Assimp's structure is shown below: 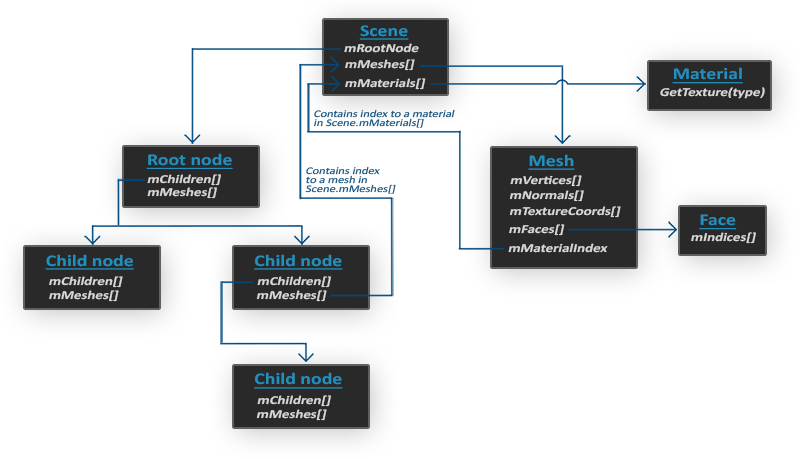 So what we want to do is first load an object into a Scene object, recursively retrieve the corresponding Mesh objects from each of the nodes (we recursively search each node's children) and process each Mesh object to retrieve the vertex data, indices and its material properties. The result is then a collection of mesh data that we want to contain in a single Model object.

In the next tutorials we'll create our own and class that load and store the imported models using the structure we've just described. If we then want to draw a model we do not render the model as a whole but we render all of the individual meshes that the model is composed of. However, before we can start importing models we first need to actually include Assimp in our project.

You can download Assimp from their download page and choose the corresponding version. As of this writing the newest Assimp version used was version 3.1.1. It is advised to compile the libraries by yourself, since their pre-compiled libraries aren't working on most systems. Review the Creating a window tutorial if you forgot how to compile a library by yourself via CMake.

A few issues came up though while building Assimp so I'll note them down here with their solutions in case any of you get the same errors:

If you still received any unreported error, feel free to ask for help in the comments below.

By now you should have compiled Assimp and linked it to your application. Next step: importing fancy 3D stuff!