All the lighting we've used so far came from a single source that is a single point in space. It gives good results, but in the real world we have several types of light that each act different. A light source that casts light upon objects is called a . In this chapter we'll discuss several different types of light casters. Learning to simulate different light sources is yet another tool in your toolbox to further enrich your environments.

We'll first discuss a directional light, then a point light which is an extension of what we had before, and lastly we'll discuss spotlights. In the next chapter we'll combine several of these different light types into one scene. 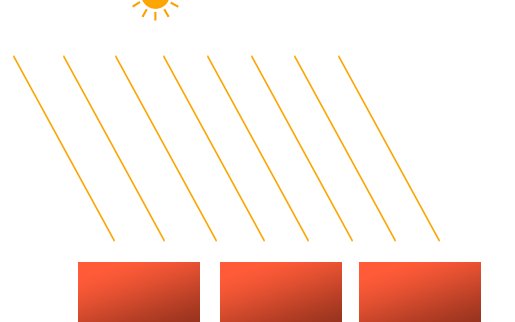 The resulting lightDir vector is then used as before in the diffuse and specular computations.

To clearly demonstrate that a directional light has the same effect on multiple objects we revisit the container party scene from the end of the Coordinate systems chapter. In case you missed the party we defined 10 different container positions and generated a different model matrix per container where each model matrix contained the appropriate local-to-world transformations:

If you'd now compile the application and fly through the scene it looks like there is a sun-like light source casting light on all the objects. Can you see that the diffuse and specular components all react as if there was a light source somewhere in the sky? It'll look something like this: 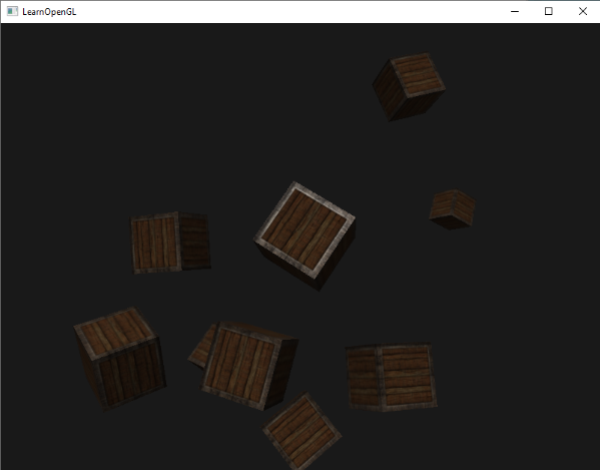 You can find the full source code of the application here.

Directional lights are great for global lights that illuminate the entire scene, but we usually also want several scattered throughout the scene. A point light is a light source with a given position somewhere in a world that illuminates in all directions, where the light rays fade out over distance. Think of light bulbs and torches as light casters that act as a point light. 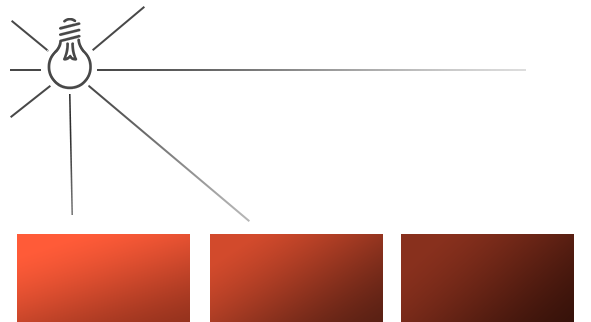 In the earlier chapters we've been working with a simplistic point light. We had a light source at a given position that scatters light in all directions from that given light position. However, the light source we defined simulated light rays that never fade out thus making it look like the light source is extremely strong. In most 3D applications we'd like to simulate a light source that only illuminates an area close to the light source and not the entire scene.

Luckily some smart people already figured this out for us. The following formula calculates an attenuation value based on a fragment's distance to the light source which we later multiply with the light's intensity vector:

Here \(d\) represents the distance from the fragment to the light source. Then to calculate the attenuation value we define 3 (configurable) terms: a term \(K_c\), a term \(K_l\) and a term \(K_q\).

Due to the quadratic term the light will diminish mostly at a linear fashion until the distance becomes large enough for the quadratic term to surpass the linear term and then the light intensity will decrease a lot faster. The resulting effect is that the light is quite intense when at a close range, but quickly loses its brightness over distance until it eventually loses its brightness at a more slower pace. The following graph shows the effect such an attenuation has over a distance of 100: 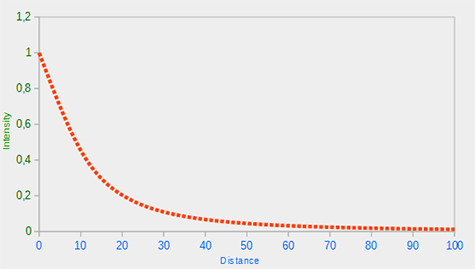 You can see that the light has the highest intensity when the distance is small, but as soon as the distance grows its intensity is significantly reduced and slowly reaches 0 intensity at around a distance of 100. This is exactly what we want.

But at what values do we set those 3 terms? Setting the right values depend on many factors: the environment, the distance you want a light to cover, the type of light etc. In most cases, it simply is a question of experience and a moderate amount of tweaking. The following table shows some of the values these terms could take to simulate a realistic (sort of) light source that covers a specific radius (distance). The first column specifies the distance a light will cover with the given terms. These values are good starting points for most lights, with courtesy of Ogre3D's wiki:

As you can see, the constant term \(K_c\) is kept at 1.0 in all cases. The linear term \(K_l\) is usually quite small to cover larger distances and the quadratic term \(K_q\) is even smaller. Try to experiment a bit with these values to see their effect in your implementation. In our environment a distance of 32 to 100 is generally enough for most lights.

To implement attenuation we'll be needing 3 extra values in the fragment shader: namely the constant, linear and quadratic terms of the equation. These are best stored in the struct we defined earlier. Note that we need to calculate lightDir again using position as this is a point light (as we did in the previous chapter) and not a directional light.

Then we set the terms in our application: we want the light to cover a distance of 50 so we'll use the appropriate constant, linear and quadratic terms from the table:

Implementing attenuation in the fragment shader is relatively straightforward: we simply calculate an attenuation value based on the equation and multiply this with the ambient, diffuse and specular components.

We do need the distance to the light source for the equation to work though. Remember how we can calculate the length of a vector? We can retrieve the distance term by calculating the difference vector between the fragment and the light source and take that resulting vector's length. We can use GLSL's built-in function for that purpose:

If you'd run the application you'd get something like this: 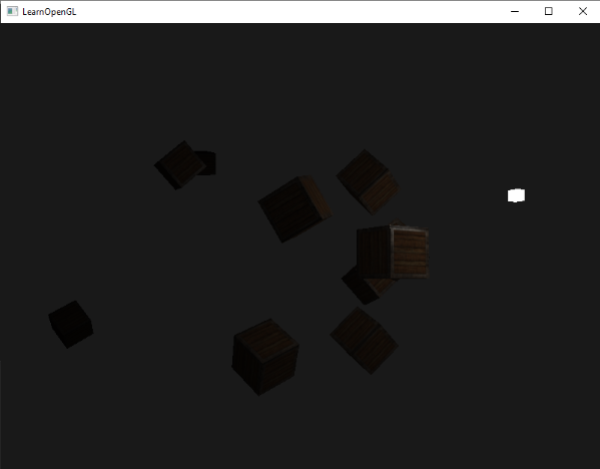 You can see that right now only the front containers are lit with the closest container being the brightest. The containers in the back are not lit at all since they're too far from the light source. You can find the source code of the application here.

A point light is thus a light source with a configurable location and attenuation applied to its lighting calculations. Yet another type of light for our lighting arsenal.

The last type of light we're going to discuss is a . A spotlight is a light source that is located somewhere in the environment that, instead of shooting light rays in all directions, only shoots them in a specific direction. The result is that only the objects within a certain radius of the spotlight's direction are lit and everything else stays dark. A good example of a spotlight would be a street lamp or a flashlight.

A spotlight in OpenGL is represented by a world-space position, a direction and a angle that specifies the radius of the spotlight. For each fragment we calculate if the fragment is between the spotlight's cutoff directions (thus in its cone) and if so, we lit the fragment accordingly. The following image gives you an idea of how a spotlight works: 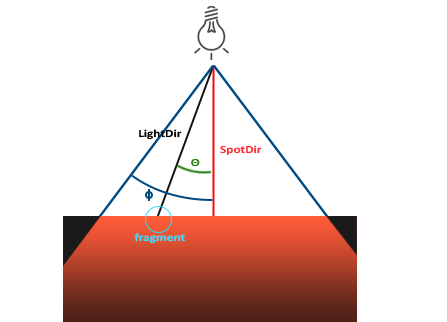 So what we basically need to do, is calculate the dot product (returns the cosine of the angle between two unit vectors) between the LightDir vector and the SpotDir vector and compare this with the cutoff angle \(\phi\). Now that you (sort of) understand what a spotlight is all about we're going to create one in the form of a flashlight.

Next we pass the appropriate values to the shader:

Now what's left to do is calculate the theta \(\theta\) value and compare this with the cutoff \(\phi\) value to determine if we're in or outside the spotlight:

We first calculate the dot product between the lightDir vector and the negated direction vector (negated, because we want the vectors to point towards the light source, instead of from). Be sure to normalize all the relevant vectors.

Running the application results in a spotlight that only lights the fragments that are directly inside the cone of the spotlight. It'll look something like this: 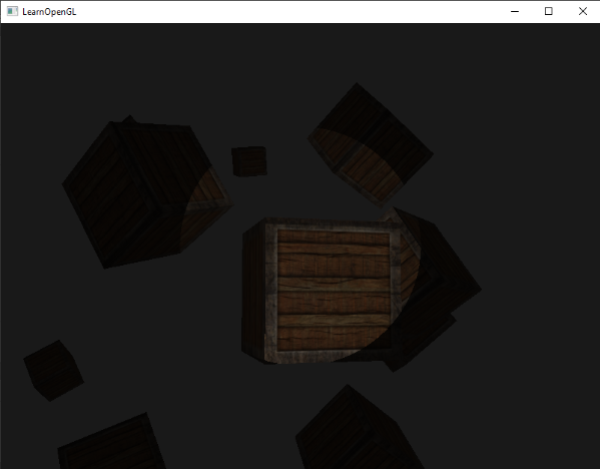 You can find the full source code here.

It still looks a bit fake though, mostly because the spotlight has hard edges. Wherever a fragment reaches the edge of the spotlight's cone it is shut down completely instead of with a nice smooth fade. A realistic spotlight would reduce the light gradually around its edges.

To create the effect of a smoothly-edged spotlight we want to simulate a spotlight having an and an cone. We can set the inner cone as the cone defined in the previous section, but we also want an outer cone that gradually dims the light from the inner to the edges of the outer cone.

We can calculate such a value using the following equation: \begin{equation} I = \frac{\theta - \gamma}{\epsilon} \end{equation} Here \(\epsilon\) (epsilon) is the cosine difference between the inner (\(\phi\)) and the outer cone (\(\gamma\)) (\(\epsilon = \phi - \gamma\)). The resulting \(I\) value is then the intensity of the spotlight at the current fragment.

It is a bit hard to visualize how this formula actually works so let's try it out with a few sample values:

As you can see we're basically interpolating between the outer cosine and the inner cosine based on the \(\theta\) value. If you still don't really see what's going on, don't worry, you can simply take the formula for granted and return here when you're much older and wiser.

We now have an intensity value that is either negative when outside the spotlight, higher than 1.0 when inside the inner cone, and somewhere in between around the edges. If we properly clamp the values we don't need an if-else in the fragment shader anymore and we can simply multiply the light components with the calculated intensity value:

Note that we use the function that its first argument between the values 0.0 and 1.0. This makes sure the intensity values won't end up outside the [0, 1] range. 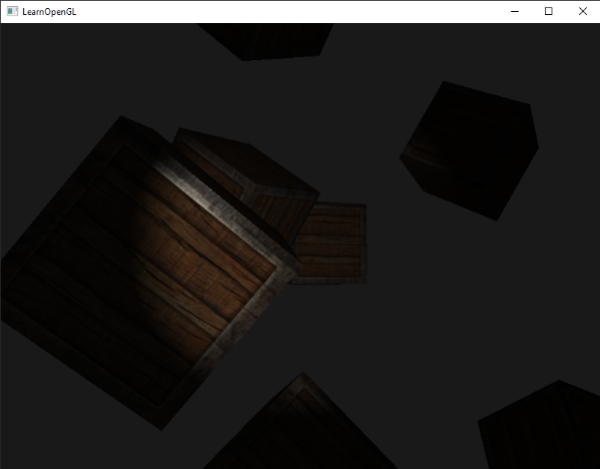 Ahhh, that's much better. Play around with the inner and outer cutoff angles and try to create a spotlight that better suits your needs. You can find the source code of the application here.

Such a flashlight/spotlight type of lamp is perfect for horror games and combined with directional and point lights the environment will really start to light up.