When trying to determine if a collision occurs between two objects, we generally do not use the vertex data of the objects themselves since these objects often have complicated shapes; this in turn makes the collision detection complicated. For this reason, it is a common practice to use more simple shapes (that usually have a nice mathematical definition) for collision detection that we overlay on top of the original object. We then check for collisions based on these simple shapes; this makes the code easier and saves a lot of performance. A few examples of such are circles, spheres, rectangles, and boxes; these are a lot simpler to work with compared to arbitrary meshes with hundreds of triangles.

While the simple shapes do give us easier and more efficient collision detection algorithms, they share a common disadvantage in that these shapes usually do not fully surround the object. The effect is that a collision may be detected that didn't really collide with the actual object; one should always keep in mind that these shapes are just approximations of the real shapes. 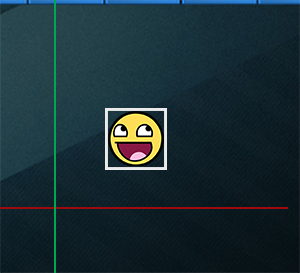 Almost all the objects in Breakout are rectangular based objects, so it makes perfect sense to use axis aligned bounding boxes for detecting collisions. This is exactly what we're going to do.

Translating this concept to code is relatively straightforward. We check for overlap on both axes and if so, return a collision:

To keep the collision code a bit more organized we add an extra function to the class:

Within , we check for collisions between the ball object and each brick of the level. If we detect a collision, we set the brick's Destroyed property to true, which instantly stops the level from rendering this brick:

Then we also need to update the game's function:

If we run the code now, the ball should detect collisions with each of the bricks and if the brick is not solid, the brick is destroyed. If you run the game now it'll look something like this:

Because the ball is a circle-like object, an AABB is probably not the best choice for the ball's collision shape. The collision code thinks the ball is a rectangular box, so the ball often collides with a brick even though the ball sprite itself isn't yet touching the brick. 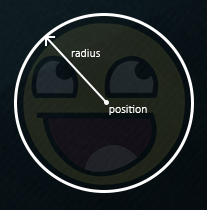 This does mean we have to update the detection algorithm since it currently only works between two AABBs. Detecting collisions between a circle and a rectangle is a bit more complicated, but the trick is as follows: we find the point on the AABB that is closest to the circle, and if the distance from the circle to this point is less than its radius, we have a collision.

The difficult part is getting this closest point \(\color{red}{\bar{P}}\) on the AABB. The following image shows how we can calculate this point for any arbitrary AABB and circle:

We first need to get the difference vector between the ball's center \(\color{blue}{\bar{C}}\) and the AABB's center \(\color{green}{\bar{B}}\) to obtain \(\color{purple}{\bar{D}}\). What we then need to do is this vector \(\color{purple}{\bar{D}}\) to the AABB's half-extents \(\color{orange}{{w}}\) and \(\color{teal}{\bar{h}}\) and add it to \(\color{green}{\bar{B}}\). The half-extents of a rectangle are the distances between the rectangle's center and its edges: its size divided by two. This returns a position vector that is always located somewhere at the edge of the AABB (unless the circle's center is inside the AABB).

This is all expressed in code as follows:

We create an overloaded function for that specifically deals with the case between a and a . Because we did not store the collision shape information in the objects themselves we have to calculate them: first the center of the ball is calculated, then the AABB's half-extents and its center.

Since we previously called with the ball object as its first argument, we do not have to change any code since the overloaded version of now automatically applies. The result is now a much more precise collision detection algorithm:

It seems to work, but still, something is off. We properly do all the collision detection, but the ball does not react in any way to the collisions. We need to update the ball's position and/or velocity whenever a collision occurs. This is the topic of the next chapter.