Let's see if we can get GLFW up and running. First, create a .cpp file and add the following includes to the top of your newly created file.

Next, we create the function where we will instantiate the GLFW window:

In the main function we first initialize GLFW with , after which we can configure GLFW using . The first argument of tells us what option we want to configure, where we can select the option from a large enum of possible options prefixed with GLFW_. The second argument is an integer that sets the value of our option. A list of all the possible options and its corresponding values can be found at GLFW's window handling documentation. If you try to run the application now and it gives a lot of undefined reference errors it means you didn't successfully link the GLFW library.

Since the focus of this book is on OpenGL version 3.3 we'd like to tell GLFW that 3.3 is the OpenGL version we want to use. This way GLFW can make the proper arrangements when creating the OpenGL context. This ensures that when a user does not have the proper OpenGL version GLFW fails to run. We set the major and minor version both to 3. We also tell GLFW we want to explicitly use the core-profile. Telling GLFW we want to use the core-profile means we'll get access to a smaller subset of OpenGL features without backwards-compatible features we no longer need. Note that on Mac OS X you need to add (GLFW_OPENGL_FORWARD_COMPAT, GL_TRUE); to your initialization code for it to work.

Next we're required to create a window object. This window object holds all the windowing data and is required by most of GLFW's other functions.

The function requires the window width and height as its first two arguments respectively. The third argument allows us to create a name for the window; for now we call it "LearnOpenGL" but you're allowed to name it however you like. We can ignore the last 2 parameters. The function returns a object that we'll later need for other GLFW operations. After that we tell GLFW to make the context of our window the main context on the current thread.

In the previous chapter we mentioned that GLAD manages function pointers for OpenGL so we want to initialize GLAD before we call any OpenGL function:

We pass GLAD the function to load the address of the OpenGL function pointers which is OS-specific. GLFW gives us that defines the correct function based on which OS we're compiling for.

Before we can start rendering we have to do one last thing. We have to tell OpenGL the size of the rendering window so OpenGL knows how we want to display the data and coordinates with respect to the window. We can set those dimensions via the function:

The first two parameters of set the location of the lower left corner of the window. The third and fourth parameter set the width and height of the rendering window in pixels, which we set equal to GLFW's window size.

We could actually set the viewport dimensions at values smaller than GLFW's dimensions; then all the OpenGL rendering would be displayed in a smaller window and we could for example display other elements outside the OpenGL viewport.

The framebuffer size function takes a as its first argument and two integers indicating the new window dimensions. Whenever the window changes in size, GLFW calls this function and fills in the proper arguments for you to process.

We do have to tell GLFW we want to call this function on every window resize by registering it:

When the window is first displayed gets called as well with the resulting window dimensions. For retina displays width and height will end up significantly higher than the original input values.

There are many callbacks functions we can set to register our own functions. For example, we can make a callback function to process joystick input changes, process error messages etc. We register the callback functions after we've created the window and before the render loop is initiated.

We don't want the application to draw a single image and then immediately quit and close the window. We want the application to keep drawing images and handling user input until the program has been explicitly told to stop. For this reason we have to create a while loop, that we now call the , that keeps on running until we tell GLFW to stop. The following code shows a very simple render loop:

The function checks at the start of each loop iteration if GLFW has been instructed to close. If so, the function returns true and the render loop stops running, after which we can close the application.
The function checks if any events are triggered (like keyboard input or mouse movement events), updates the window state, and calls the corresponding functions (which we can register via callback methods). The will swap the color buffer (a large 2D buffer that contains color values for each pixel in GLFW's window) that is used to render to during this render iteration and show it as output to the screen.

As soon as we exit the render loop we would like to properly clean/delete all of GLFW's resources that were allocated. We can do this via the function that we call at the end of the function.

This will clean up all the resources and properly exit the application. Now try to compile your application and if everything went well you should see the following output: 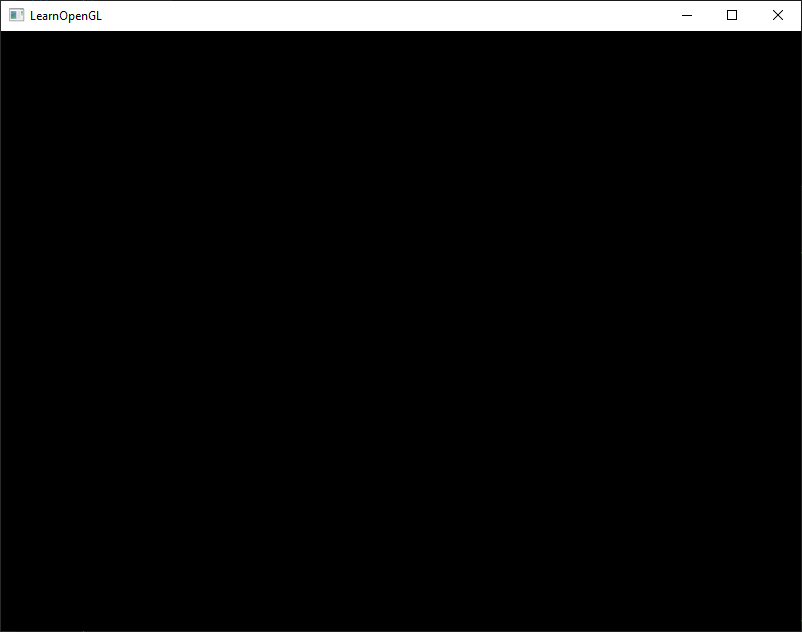 If it's a very dull and boring black image, you did things right! If you didn't get the right image or you're confused as to how everything fits together, check the full source code here.

If you have issues compiling the application, first make sure all your linker options are set correctly and that you properly included the right directories in your IDE (as explained in the previous chapter). Also make sure your code is correct; you can verify it by comparing it with the full source code.

We also want to have some form of input control in GLFW and we can achieve this with several of GLFW's input functions. We'll be using GLFW's function that takes the window as input together with a key. The function returns whether this key is currently being pressed. We're creating a function to keep all input code organized:

Here we check whether the user has pressed the escape key (if it's not pressed, returns GLFW_RELEASE). If the user did press the escape key, we close GLFW by setting its WindowShouldClose property to true using . The next condition check of the main while loop will then fail and the application closes.

We then call every iteration of the render loop:

This gives us an easy way to check for specific key presses and react accordingly every . An iteration of the render loop is more commonly called a .

Note that we also specify the color to clear the screen with using . Whenever we call and clear the color buffer, the entire color buffer will be filled with the color as configured by . This will result in a dark green-blueish color. 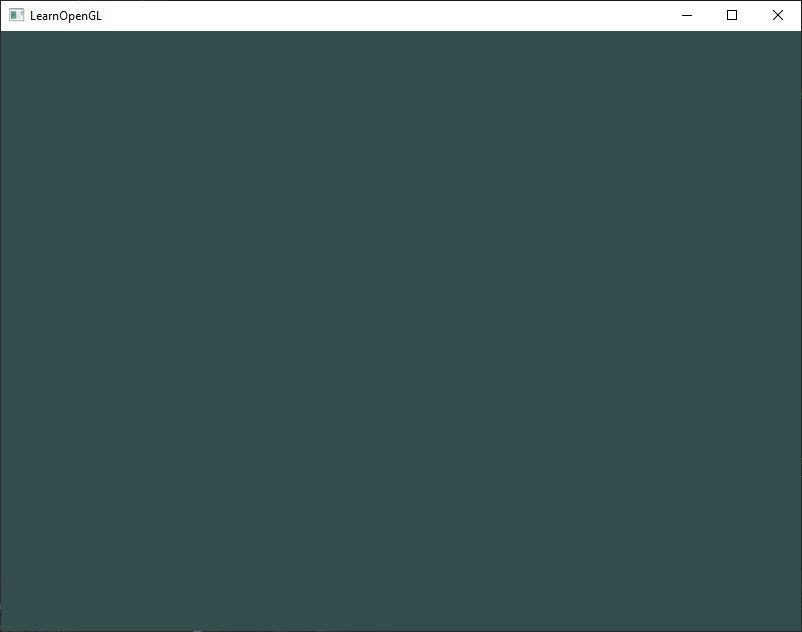 The full source code of the application can be found here.

So right now we got everything ready to fill the render loop with lots of rendering calls, but that's for the next chapter. I think we've been rambling long enough here.