Once the fragment shader has processed the fragment a so called is executed that, just like the depth test, has the option to discard fragments. After that the remaining fragments are passed to the depth test where OpenGL could possibly discard even more fragments. The stencil test is based on the content of yet another buffer called the that we're allowed to update during rendering to achieve interesting effects.

A stencil buffer (usually) contains 8 bits per that amounts to a total of 256 different stencil values per pixel. We can set these stencil values to values of our liking and we can discard or keep fragments whenever a particular fragment has a certain stencil value.

A simple example of a stencil buffer is shown below (pixels not-to-scale):

The stencil buffer is first cleared with zeros and then an open rectangle of 1s is stored in the stencil buffer. The fragments of the scene are then only rendered (the others are discarded) wherever the stencil value of that fragment contains a 1.

By using the stencil buffer we can thus discard certain fragments based on the fragments of other drawn objects in the scene.

You can enable stencil testing by enabling GL_STENCIL_TEST. From that point on, all rendering calls will influence the stencil buffer in one way or another.

Note that you also need to clear the stencil buffer each iteration just like the color and depth buffer:

Most of the cases you'll only be using 0x00 or 0xFF as the stencil mask, but it's good to know there are options to set custom bit-masks.

Similar to depth testing, we have a certain amount of control over when a stencil test should pass or fail and how it should affect the stencil buffer. There are a total of two functions we can use to configure stencil testing: and .

The has three parameters:

So in the case of the simple stencil example we've shown at the start, the function would be set to:

This tells OpenGL that whenever the stencil value of a fragment is equal (GL_EQUAL) to the reference value 1, the fragment passes the test and is drawn, otherwise discarded.

But only describes whether OpenGL should pass or discard fragments based on the stencil buffer's content, not how we can actually update the buffer. That is where comes in.

The contains three options of which we can specify for each option what action to take:

Then for each of the options you can take any of the following actions:

So using and we can precisely specify when and how we want to update the stencil buffer and when to pass or discard fragments based on its content.

It would be unlikely if you completely understood how stencil testing works from the previous sections alone so we're going to demonstrate a particular useful feature that can be implemented with stencil testing alone called . 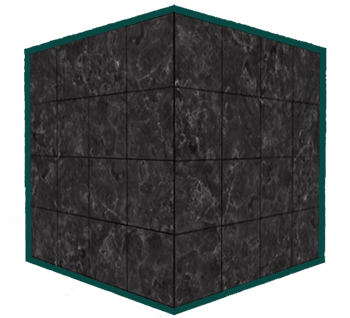 Object outlining does exactly what it says it does. For each object (or only one) we're creating a small colored border around the (combined) objects. This is a particular useful effect when you want to select units in a strategy game for example and need to show the user which of the units were selected. The routine for outlining your objects is as follows:

So we're first going to create a very basic fragment shader that outputs a border color. We simply set a hardcoded color value and call the shader shaderSingleColor:

And then in each frame we want to specify the action to take whenever any of the stencil tests succeed or fail:

If any of the tests fail we do nothing; we simply keep the currently stored value that is in the stencil buffer. If both the stencil test and the depth test succeed however, we want to replace the stored stencil value with the reference value set via which we later set to 1.

The total object outlining routine for our scene looks something like this:

As long as you understand the general idea behind stencil testing this shouldn't be too hard to understand. Otherwise try to carefully read the previous sections again and try to completely understand what each of the functions does now that you've seen an example of it can be used.

The result of the outlining algorithm then looks like this: 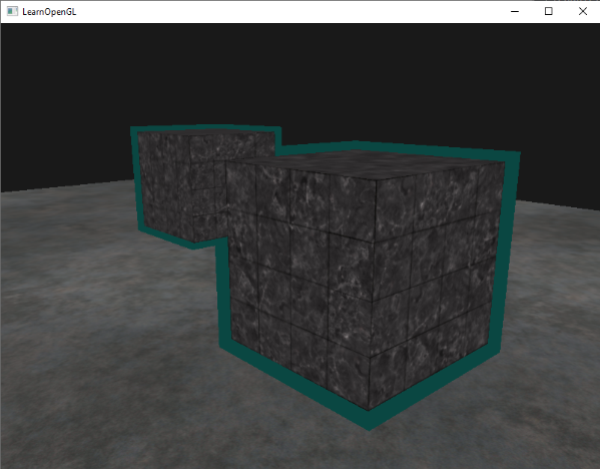 Check the source code here to see the complete code of the object outlining algorithm.

The object outlining algorithm you've seen is commonly used in games to visualize selected objects (think of strategy games) and an algorithm like this can easily be implemented within a model class. You could set a boolean flag within the model class to draw either with borders or without. If you want to be creative you could even give the borders a more natural look with the help of post-processing filters like Gaussian Blur.

Stencil testing has many more purposes (beside outlining objects) like drawing textures inside a rear-view mirror so it neatly fits into the mirror shape, or rendering real-time shadows with a stencil buffer technique called . Stencil buffers give us with yet another nice tool in our already extensive OpenGL toolkit.