Try mentally visualizing a 3D cube and count the maximum number of faces you'll be able to see from any direction. If your imagination is not too creative you probably ended up with a maximum number of 3. You can view a cube from any position and/or direction, but you would never be able to see more than 3 faces. So why would we waste the effort of drawing those other 3 faces that we can't even see. If we could discard those in some way we would save more than 50% of this cube's total fragment shader runs!

This is a really great idea, but there's one problem we need to solve: how do we know if a face of an object is not visible from the viewer's point of view? If we imagine any closed shape, each of its faces has two sides. Each side would either face the user or show its back to the user. What if we could only render the faces that are facing the viewer?

This is exactly what does. OpenGL checks all the faces that are towards the viewer and renders those while discarding all the faces that are , saving us a lot of fragment shader calls. We do need to tell OpenGL which of the faces we use are actually the front faces and which faces are the back faces. OpenGL uses a clever trick for this by analyzing the of the vertex data.

When we define a set of triangle vertices we're defining them in a certain winding order that is either or . Each triangle consists of 3 vertices and we specify those 3 vertices in a winding order as seen from the center of the triangle. 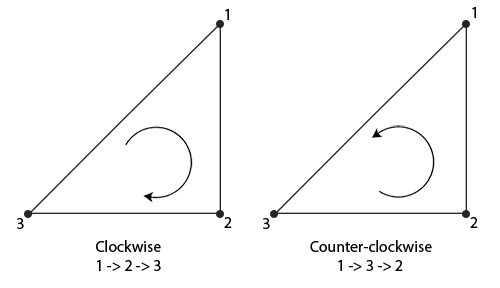 As you can see in the image we first define vertex 1 and from there we can choose whether the next vertex is 2 or 3. This choice defines the winding order of this triangle. The following code illustrates this:

Each set of 3 vertices that form a triangle primitive thus contain a winding order. OpenGL uses this information when rendering your primitives to determine if a triangle is a or a triangle. By default, triangles defined with counter-clockwise vertices are processed as front-facing triangles.

When defining your vertex order you visualize the corresponding triangle as if it was facing you, so each triangle that you're specifying should be counter-clockwise as if you're directly facing that triangle. The cool thing about specifying all your vertices like this is that the actual winding order is calculated at the rasterization stage, so when the vertex shader has already run. The vertices are then seen as from the viewer's point of view. 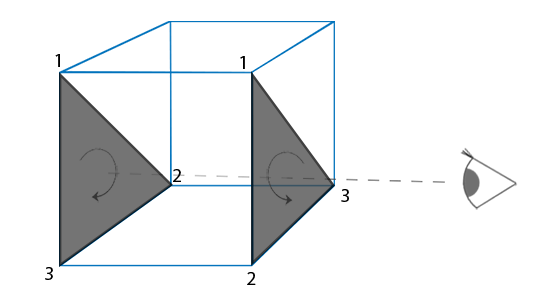 At the start of the chapter we said that OpenGL is able to discard triangle primitives if they're rendered as back-facing triangles. Now that we know how to set the winding order of the vertices we can start using OpenGL's option which is disabled by default.

To enable face culling we only have to enable OpenGL's GL_CULL_FACE option:

From this point on, all the faces that are not front-faces are discarded (try flying inside the cube to see that all inner faces are indeed discarded). Currently we save over 50% of performance on rendering fragments if OpenGL decides to render the back faces first (otherwise depth testing would've discarded them already). Do note that this only really works with closed shapes like a cube. We do have to disable face culling again when we draw the grass leaves from the previous chapter, since their front and back face should be visible.

The function has three possible options:

The initial value of is GL_BACK. We can also tell OpenGL we'd rather prefer clockwise faces as the front-faces instead of counter-clockwise faces via :

The result is that only the back faces are rendered: 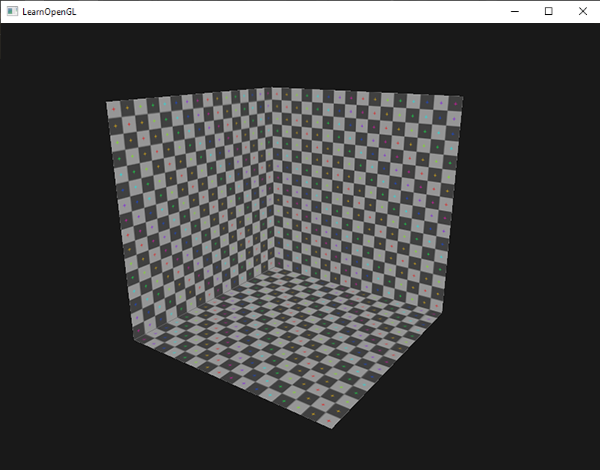 Note that you can create the same effect by culling front faces with the default counter-clockwise winding order:

As you can see, face culling is a great tool for increasing performance of your OpenGL applications with minimal effort; especially as all 3D applications export models with consistent winding orders (CCW by default). You do have to keep track of the objects that will actually benefit from face culling and which objects shouldn't be culled at all.